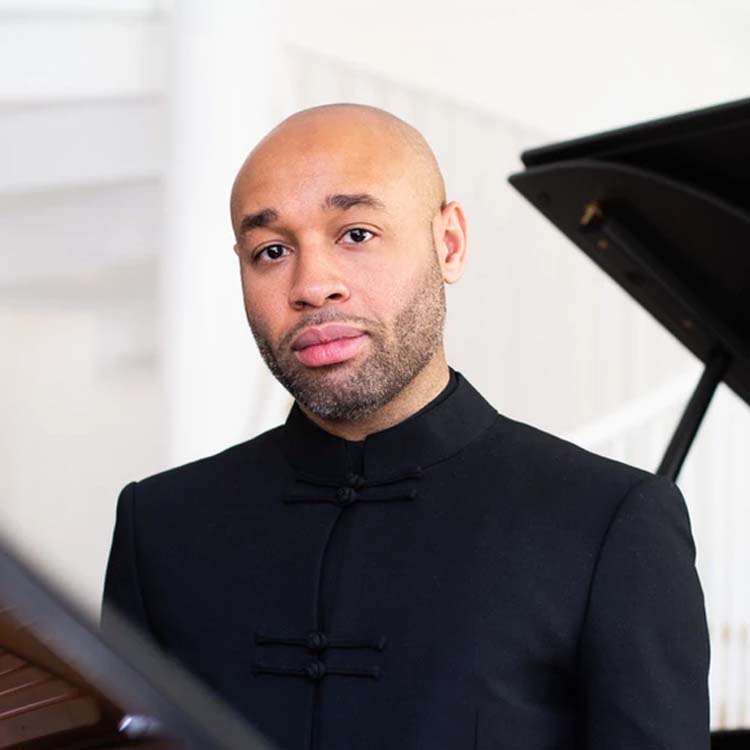 Since his debut release on Mack Avenue Records in 2013, pianist-composer Aaron Diehl has mystified listeners with his layered artistry. He reaches into expansion. At once temporal and ethereal — deliberate in touch and texture — his expression transforms the piano into an orchestral vessel in the spirit of beloved predecessors Ahmad Jamal, Erroll Garner, Art Tatum and Jelly Roll Morton. Moment to moment, he considers what instrument he’s moved to evoke. “This is a singular voice here, but maybe this section is a saxophone soli, or this piece here are high winds or low brass in the bass,” says the Steinway artist, describing his concept on the bandstand.

Following three critically-acclaimed leader albums, the American Pianist Association’s 2011 Cole Porter fellow now focuses his attention on what it means to be authentic, to be present within himself. His most recent release on Mack Avenue, The Vagabond, reveals his breadth as who The New York Times calls “a composer worth watching.” Across nine original tracks and works by Philip Glass and Sergei Prokofiev, Aaron leans into imagination and exploration. His forthcoming solo record, poised for release in spring 2021, promises an expansion of that search in a setting at once unbound and intimate.

In his sound, Aaron finds evolving meaning in the briefest phrases. He conjures three-dimensional expansion of melody, counterpoint and movement through time. Rather than choose one sound or another, one genre or another — one identity or another — Aaron invites listeners into the chambered whole of his artistry. His approach reflects varied ancestral lineages and cultural expressions. And he remains committed to independence and self-discovery.

Born in Columbus, Ohio, a young Aaron flourished among family members supportive of his artistic inclinations. His grandfather, piano and trombone player Arthur Baskerville, inspired him to pursue music and nurtured his talent. In 2003, Aaron traveled to New York; following his success as a finalist in Jazz at Lincoln Center’s 2002 Essentially Ellington competition and a subsequent European tour with Wynton Marsalis, he began studying under mentors Kenny Barron, Eric Reed and Oxana Yablonskaya, earning his Bachelor of Music in Jazz Studies at the Juilliard School. His love affair with rub and tension prompted a years-long immersion in seemingly disparate sound palettes he found to be similar in depth, resonance and impulse to explore, from Monk and Ravel to Gershwin and William Grant Still. Among other towering figures, Still in particular inspires Aaron’s ongoing curation of Black American composers in his own performance programming, unveiled this past fall at 92nd St. Y. This ongoing project, along with his recent and widely lauded trio interpretations of Glass’ iconic repertoire, has propelled Aaron into the next phase of self-actualizing. He embraces the challenge of drawing on other artists’ visions and expressions, then interpreting those within the framework of his own personal aesthetic.
​
At age 17, Diehl was a finalist in Jazz at Lincoln Center’s Essentially Ellington competition, where he was noticed by Wynton Marsalis. Soon after, Diehl was invited to tour Europe with the Wynton Marsalis Septet (Marsalis has famously referred to him as “The Real Diehl.”) That Fall he would matriculate to the Juilliard School, studying with jazz pianists Kenny Barron and Eric Reed and classical pianist Oxana Yablonskaya. Diehl came to wider recognition in 2011 as winner of the American Pianists Association’s Cole Porter Fellowship, which included $50,000 in career development and a recording contract with the esteemed Mack Avenue Records.

As thoroughly a collaborator as he is a leader, Aaron has appeared at such celebrated international venues as The Barbican, Ronnie Scott’s, Elbphilharmonie and Philharmonie de Paris, as well as domestic mainstays Jazz at Lincoln Center, The Kennedy Center, The Village Vanguard and Walt Disney Hall. Jazz Festival appearances comprise performances at Detroit, Newport, Atlanta and Monterey, for which he received the 2014 festival commission. Orchestral performances include hits at New York Philharmonic, Boston Symphony Orchestra, Los Angeles Philharmonic and the Philadelphia Orchestra.

Aaron’s appetite for expansion has afforded him passing and extended associations with some of the music’s most fascinating and enduring figures including Wynton Marsalis, Benny Golson, Jimmy Heath, Buster Williams, Branford Marsalis, Wycliffe Gordon and Philip Glass. His formative association with multi-GRAMMY award-winning artist Cecile McLorin Salvant only enhanced his study and deeply personal delivery of the American Songbook. Recent highlights have included appearing at the New York premiere of Philip Glass’ complete Etudes at the Brooklyn Academy of Music, collaborating with flamenco guitarist Dani De Morón in Flamenco Meets Jazz (produced by Savannah Music Festival and Flamenco Festival) and performing with the New York Philharmonic and the Cleveland Orchestra as featured soloist on George Gershwin’s Piano Concerto in F. The New York Times lauded the “brilliance” of his performance: “The roomy freedom of [his] playing in bluesy episodes was especially affecting. He folded short improvised sections into the score, and it’s hard to imagine that Gershwin would not have been impressed.”

When he’s not at the studio or on the road, he’s likely in the air. A licensed pilot, Aaron holds commercial single- and multi-engine certificates.